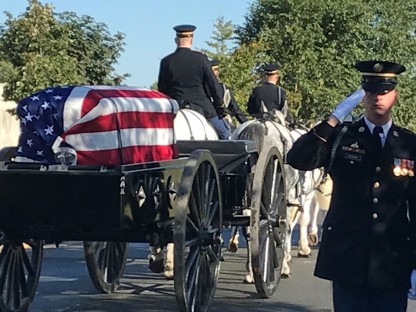 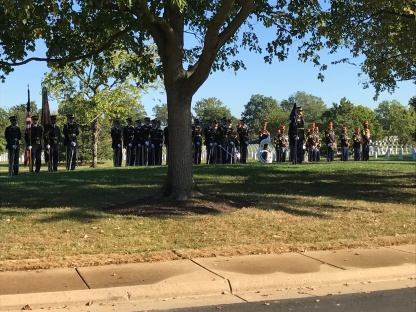 Very few ceremonies are as poignant and gut wrenching as a military funeral, especially when the deceased is the recipient of full military honors. The solemnity of the occasion is underscored by the service men and women in their dress uniforms that comprise the escort platoon. Their bearing and actions bespeak deep respect and silent thanks for the selfless service and sacrifice rendered in times of war and peace in defense of our country. A horse-drawn caisson transports the remains to the grave site. An American flag is draped over the coffin with the blue field of stars at the head and the red and white stripes covering the length of the casket. All horses are saddled, but those on the right are riderless, harkening back to the days when horses were used to haul ammunition and provisions to the battlefield. A military band provides patriotic music. A rifle detail fires three volleys signifying duty, honor, country. Finally, the mournful notes of “Taps” are played by a lone bugler.

For anyone who isn’t aware, Taps was sounded for the first time in July 1862 during the Civil War. Subsequently words were put with the music. According to the official Arlington National Cemetery website the first were “Go to Sleep, Go to Sleep.” As the years went on many more versions were created, but there are no official words to the music.

This is one rendering – excerpt from Silver Taps:

Day is done, gone the sun,

From the hills, from the lake,

All is well, safely rest,

May the soldier or sailor,

On the land or the deep,

Love, good night, Must thou go,

When the day, And the night

All is well. Speedeth all

Fades the light; And afar

Goeth day, And the stars

Thanks and praise, For our days,