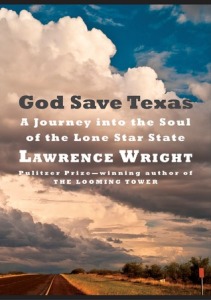 Pulitzer Prize winning author Lawrence Wright has written what can best be described as a meditation on what it is is about Texas that makes it so unique and influential. His thoughts are presented with a great deal of wit and humor, and contain insightful information on everything from history to culture to politics.

Politically, Texas has always influenced national discourse and policy. Three of its favorite sons –  Lyndon Johnson, George W. Bush, and George H. W. Bush were elected to the presidency of the United States. And today, its leaders in Austin have made it one of the most conservative states in the Union, not only aligning Texas with the nationalistic policies of the Trump administration but leading the fight against illegal immigration and the establishment of sanctuary cities.

Wright voices his misgivings about the direction of this leadership both in Washington and Austin, but does so in an introspective contemplation on why he loves Texas so much. Obviously, when you’re searching for the “soul” of what makes Texas… Texas, you have to look beyond political differences to examine everything that sets it apart from every other state.

Oil magnates, cattle barons, musicians and writers have all shaped our conception of the Lone Star State, and Wright covers them all. He journeys from Austin to Dallas, Houston, San Antonio, and El Paso (and all places in between from the Rio Grande Valley to the plains of West Texas.) He discusses the oil boom from its beginning at Spindletop to today’s fracking in the Permian Basin and the role oil, cattle and cowboys have played in forging the image of Texans to the rest of the world. He looks at NASA and our place in space exploration, the influence of Texas musicians from Buddy Holly to Willie Nelson, and the contributions of authors like Larry McMurtry with his ode to the great cattle drives (Lonesome Dove) and his description of life in an isolated and dying Texas town (The Last Picture Show.)

Wright also describes the beauty and diversity of the land from the pine forests of East Texas to the deserts of the Trans-Pecos. He finds serenity in Big Bend National Park, and relishes the quirkiness of places like Marfa, Texas that attracts artisans and tourists with its emergence as a cultural center smack in the middle of nowhere, its linkage to one of the most influential films ever made about the state (the 1956 movie “Giant” starring Rock Hudson, Elizabeth Taylor, and James Dean) and, of course, the eerie phenomenon of the Marfa Lights that fuels speculation about extraterrestrial visitations.

There’s really no way to encapsulate all the ground covered by Wright in this book, nor his ability to truly entertain readers as he does so. I’ve lived in Texas almost fifty years, but wouldn’t know where to even begin to attempt to articulate why Texas is so extraordinary. My hat is off to Lawrence Wright who manages to educate, intellectually stimulate, and delight readers with a thoroughly engaging portrait of a state that I also happen to love.

One thought on “God Save Texas: My Review”