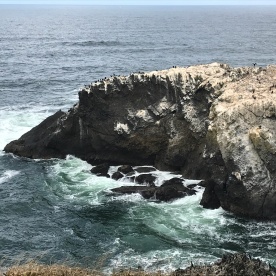 The ending to any vacation is always bittersweet; the desire for one more day conflicts with the yearning to return home. For the past ten days my wife and I have been travelling in and around the state of Oregon visiting the vibrant city of Portland, the rugged coastal shoreline around Newport, and the spectacular views along the Columbia River Gorge in Hood River. We’re heading back to Texas today but I wanted to get this post published before falling even further behind in my goal of reaching out to readers at least weekly.

Literature and history always play a major part in anything that I do, and this trip was no exception. In Portland I visited Powell’s City of Books, one of the world’s largest independent bookstores. Four stories high, taking up an entire city block, the building houses over one million books. I normally avoid large bookstores in favor of smaller more customer friendly venues, but Powell’s was a must stop and I wasn’t disappointed. A book enthusiast could meander the site forever browsing the latest publications as well as the oldest classics. I was happy to be directed to a specific aisle, on a specific floor, in a specific room to find a specific stack that held the book I was interested in obtaining. As soon as I finish reading the historical novel Daughter of a Daughter of a Queen by Sarah Bird I’ll post my review.

A visit to Yaquina Head Lighthouse near Newport (also known as the Cape Foulweather Lighthouse) offered views of tide pools teeming with wildlife as well as information on the search for the Northwest Passage. As a boy I had read and re-read the novel Northwest Passage by Kenneth Roberts which was in part the detailed account of Rogers’ Rangers during the French and Indian Wars, but also follows Robert Rogers’ later life and exploits as he attempts to mount an expedition to find the route that had long eluded other European explorers.

This quest to find a route linking North America and East Asia has captured the imagination of explorers since the 15th century. At Yaquina there are informational panels on Captain James Cook’s expeditions to the Pacific Ocean; his third (1776-1780) aboard the ships Resolution and Discovery searched for a sea route around Canada and Alaska. No such passage was found at the time and Cook’s scientific explorations ended with this voyage when he was killed by Polynesians on a beach at Kealakekua.

Treacherous ocean conditions and sea ice made the route impossible for decades. Ships’ hulls could be crushed by submerged icebergs or vessels could find themselves trapped for months at a time by surface ice resulting in death from extreme cold, starvation, and disease.

Only recently has climate change opened the passage to maritime shipping. While the first successful navigation occurred in 1906, in the summer of 2007 the route was  entirely free of ice for the first time in recorded history, and in 2016 the Crystal Serenity became the first cruise ship to navigate the passage.

Of course, I’ve only managed to crack the surface of all that awaits in the Pacific Northwest. There is so much more of Oregon yet to be discovered, as well as the U.S. states of Idaho and Washington, and the Canadian province of British Columbia. But, there’s a flight to catch and those discoveries will have to wait for another day.