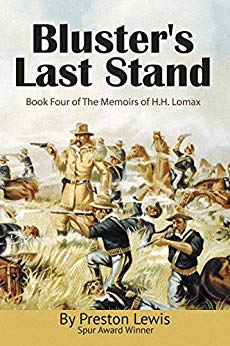 Author Preston Lewis returns to the exploits of one Henry Harrison “Leadeye” Lomax in this fourth installment into the series about his adventures in the Old West.

For anyone unfamiliar with the literary character, Lewis claims to have found his memoirs while conducting research at Texas Tech University. The assertion is definitely tongue in cheek, with Lewis presenting H.H. Lomax’s exploits with a lot of wit and humor in addition to historical detail.

As it has been some time since his last entry into the series, Lewis returns to this origination story before beginning the tale of how Lomax came to be at the Battle of the Little Bighorn. The explanation accounts for the break between novels featuring the colorful character and once again, with a wink and a nod, asserts the veracity of his eye witness account.

I must admit at this point that I somehow skipped Book Three, Mix Up at the O.K. Corral, as I was anxious to read this Spur Award Winner, but I’ll definitely be filling in the gap because each read has been an absolute hoot! (Be sure to check out my earlier blog posts… Book One, June 7, 2018 The Demise of Billy the Kid, and Book Two, February 1, 2019,The Redemption of Jessie James.)

In Bluster’s Last Stand H.H. Lomax brings levity to one of the most tragic events in military history, while also recounting the 2nd Battle of Adobe Walls and shedding light on the fame of such noted historical persons as Buffalo Bill Cody, Wild Bill Hickok, and General George Armstrong Custer. His wit and humor add context as well as nuance to such subjects as frontier prostitution, the discovery of gold in the Black Hills, the treatment of Native Americans, and the myth surrounding Yellow Hair.

The harsh realities of life aren’t glossed over, but the hilarity that Preston Lewis brings to these situations and characters makes them all the more human and entertaining.

I highly recommend the book and the series!