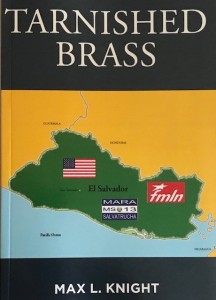 It’s one thing to write a book and quite another to get the word out following its publication. To that end I’m including the official press release from Page Publishing in today’s post. The publisher has already provided the release to local, regional, and national print, broadcast and online media, but no one is more important than you (the reader) at creating “buzz” about the book. I encourage comments at this site and reviews posted to platforms such as Goodreads and Amazon. A word or two or an in depth discussion of your reaction to the novella is very much appreciated.

Headline
Author Max L. Knight’s new book “Tarnished Brass” is a gripping and potent work of realistic fiction examining the brutal civil war in El Salvador between 1980 and 1992.
Short Description
Recent release “Tarnished Brass” from Page Publishing author Max L. Knight is a riveting novella capturing the savage violence of a military regime determined to preserve its social hierarchy and the desperate resistance of an oppressed people fighting for their lives in the El Salvadoran Civil War. Rich in vivid detail and the author’s deep knowledge of the country, its people, and the conflict itself, this story, though a work of fiction, informs and resonates with timeless and global issues of human rights and military intervention.
Long Description
Max L. Knight, a married father of five residing with his wife, Janet, in San Antonio and decorated US Army veteran who served for twenty-four years as an air defense artillery officer, retired in 1997 with the rank of lieutenant colonel, and after 9/11 once again volunteered to serve his country as a contractor for the Department of Defense in Europe, Asia, the Middle East, and Central America, has completed his new book “Tarnished Brass”: a spellbinding work of historical faction bringing the twelve-year conflict in El Salvador to life. Max writes, “From 1980 until 1992, a brutal civil war was fought in the small Central American country of El Salvador. ‘Tarnished Brass’ looks at America’s involvement in the conflict; the United States provided funding, arms, and training support to the Salvadoran military. It also examines current issues affecting both countries—twenty-six years later, gang violence has replaced and even surpassed the brutality of both the Salvadoran military and the guerrilla factions during their prolonged conflict. The war and its aftermath are told through the perspectives of a US Army officer, a guerrilla leader, and a refugee turned gang member. By giving voice to all three, it looks not only at history but at the current crises. Today, El Salvador has one of the highest per capita murder rates in the world, and the influence of MS-13 (Mara Salvatrucha) has spread beyond its borders to many cities in the United States.” “Tarnished Brass” is a timely examination of a conflict fought over thirty years ago that continues to resonate today. Though a work of fiction, the author draws upon his experiences in-country to write a story that will definitely resonate with readers looking to understand past US foreign policy as well as current events.

Published by Page Publishing, Max L. Knight’s engrossing book is a compelling read for anyone interested in Latin American and US military history. Readers who wish to experience this engaging work can purchase “Tarnished Brass” at bookstores everywhere, or online at the Apple iTunes store, Amazon, Google Play, or Barnes and Noble.