THE SQUARE ROOT OF TEXAS:

The First Calamity of QED Morningwood

QED Morningwood is a liar, braggart and teller of tall tales. When he shows up at the domino parlor with a mysterious Russian crate in the back of his pick-up truck, he confides to the players he is a ‘Shadow’ member of the NRA, not on their official membership roll, and has a load of rocket propelled grenades – all lies. The news spreads to the real Shadow NRA, the FBI and Homeland Security. Meanwhile, the Russian Ministry of Cultural Preservation sends an agent to retrieve the crate, the actual contents known only to the Russians.

The Russian agent, an FBI team, a DHS undercover agent and a Shadow NRA hit team arrive in Heelstring, Texas looking for QED and his crate. Their convergence is followed by interrogations, seduction, lies, arrests, jailbreak, kidnapping and rescue – along with car chases and explosions. If not for Cotton Widdershins, an ancient black man with secrets of his own, who acts as QED’s mentor and savior, the Morningwood line would be doomed to end, or at best spend life in a federal penitentiary.

It is always gratifying to add a new book to my library, especially when it’s been signed by the author. In my copy of The Square Root of Texas: The First Calamity of QED Morningwood the author, Rob Witherspoon, wrote “Be Irrational!” So I knew, without opening the first page that I was in for an irreverent, outlandish, hysterical read.

In mathematics, the square root of a negative number “i” is used to balance an equation to make the result real and rational. In his first Disclaimer (they’re used throughout the book,) Witherspoon writes that in this story “i” is used to make his fictionalized Texas “real and rational – or at least as real and rational as can be expected of Texas.” After all, as he correctly points out, “reality, myth and mystique, to Texans, overlap with indistinct, indistinguishable boundaries,” and (paraphrasing here) since we’re known to be mighty touchy about state pride, he’s created “a mythical Texas” that sets the tone for this satirical romp.

Not only that, the framework for the story quickly throws out all conventions that readers would normally expect to find in a book. There are no chapters. Instead, the author (with tongue in cheek) suggests things for you to do whenever you need to take a break; get a cup of coffee, go to the bathroom, do the laundry, mow the yard… you get the idea! And, at about the halfway mark he introduces what he calls the MESOLOGUE, a means of moving the story forward. Witherspoon invents the device and, after acknowledging that readers won’t find the word in any dictionary, “wonders why nobody ever thought of it.”  After all, “there’s monologue, dialogue, prologue, and epilogue…. It just seems like someone would have put a prefix meaning ‘middle’ and a suffix meaning ‘speech’ together.”

The author also lampoons almost everything and everyone in his narrative and makes no apologies for doing so. Nothing is off limits. “This book contains material that may be offensive to: Cajuns, Scots, old people, Mexicans, swordsmen and boy scouts, but not in a mean or disparaging way. More like, ‘it’s a funny old world, isn’t it?’ way. You’ve been warned. I’m not going to insert a disclaimer every time I insult a group of people. From here on out, it’s on you.”

Witherspoon takes shots at the state capital (“Outsin” in his alternative universe,) the Texas judicial system (QED’s father had been acquitted of a capital offense by a jury of his peers, rich and white, and it certainly “didn’t hurt that he financed the reelection of the sheriff and the judge the previous year”), the Certainists, “The Certain Gospel Truth Church, a denomination of profound assuredness,” and the First, Second, and Third Southern Schismatic churches which split up over the issue of whether baptisms should involve full immersion, a sprinkling, or the use of a vaporizer,) “Shana Doo’s Pleasure Dome,” a house of vice offering “mediated affection”  to discriminating and well-paying customers, and even Texas AMU, “Texas Alchemical and Metaphysical University. Home of the Fightin’ Alkies.” As a graduate of Texas A&M University, Aggie jokes have always been around, so I took it stride while I was writing this review… really!

That’s the whole point of this book. Have fun with it! It is on the one hand absurd, while on the other quite descriptive and, dare I say, representative of this unique state. The characters and the plot are summarized quite well in the Synopsis, so I’ve deliberately not gone into them in any detail. Besides, the devil is in the details, and you’ll enjoy The Square Root of Texas that much more if you don’t know what’s coming next.

That said, if you’re a Native Texan or you’ve lived here as long as I have, or perhaps you’re just somebody who has visited or read about Texas, you’ll definitely recognize attributes easily recognizable in the people and places that make up the Lone Star State.

As the subtitle, The First Calamity of QED Morningwood suggests, this is the first book of a planned series by Rob Witherspoon. There are more “misadventures” to come and I, for one, look forward to new antics and laughs. 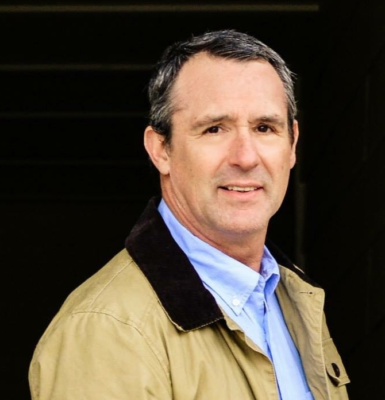 Rob Witherspoon was born and raised in rural Texas. He earned a BA in Physical Education, UT Arlington 1985 and a BS in Aerospace Engineering, UT Arlington 1990. He worked in the aerospace industry for 30 years before retiring in 2018. He lives in north central Texas with his wife and youngest daughter and has spent much of his life in rural communities and on the ranch. He combines his love for Texas, lying, the outdoors, engineering, and his children in his writing. 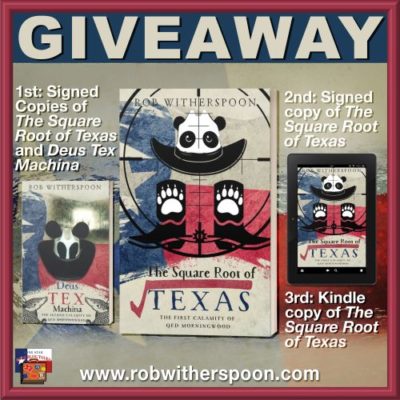 CLICK TO VISIT THE LONE STAR LITERARY LIFE TOUR PAGE
FOR DIRECT LINKS TO EACH POST ON THIS TOUR, UPDATED DAILY,
or visit the blogs directly: