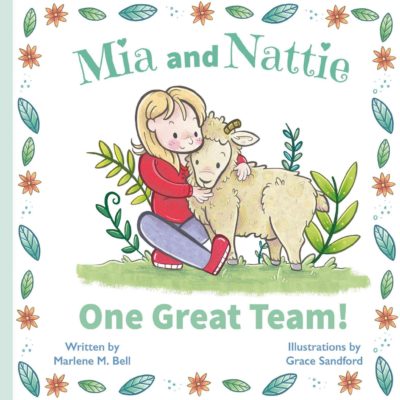 Nattie’s mouth was a little crooked. Her legs were a bit shorter than usual, and one horn was too straight, like a unicorn’s horn.

But Mia thought Nattie was perfect.

On a visit to her grandma’s farm, eight-year-old Mia discovers a newborn, orphaned lamb outside in the cold and takes her to the laundry room, naming her Nattie. As she tries to nurse the lamb back to health, Mia discovers that Nattie is different from the other lambs and struggles to fit in with them like Mia does with other kids her age.

When her grandmother says she will sell Nattie to a neighbor, Mia must come up with a plan to keep her friend around — one that will show the family just how special Nattie truly is.

MIA AND NATTIE: ONE GREAT TEAM!

She ate grass and tasty weeds.

She ate grain and hay and drank water instead of milk.

But Nattie would never be big enough to live with the rest of the flock.

She was too small to raise babies of her own.

“Your lamb needs a home,” Grandma said to Mia.

“She has one! Please let me keep her.” Mia hugged Nattie’s neck.

Mia squinted back tears before they fell on Nattie’s wool.

“A neighbor wants to buy her,” Grandma said, then spun around and walked to the barn in silence.

Mia had to find a way for Nattie to stay.

MARLENE M. BELL is an award-winning writer, artist, and crazy sheep lady who resides in beautiful East Texas. Her renown sheep photographs grace the covers of many livestock magazines where she also writes newsy articles about raising sheep from her hands-on experience.
Based on true events from the Bell’s ranch, Marlene offers the first of her children’s picture books, Mia and Nattie: One Great Team! It’s a touching story of compassion and love between a little girl and her lamb. Marlene is also the author of the award-winning Annalisse international mystery series, with the third book, Calico Raven to be released in 2021.

Marlene shares her life with her husband and dreadfully spoiled horned Dorset sheep: a large Maremma guard dog named Tia, and cats, Hollywood, Leo, and Squeaks. The cats believe they rule the household—and do.

a Rafflecopter giveaway
CLICK TO VISIT THE LONE STAR LITERARY LIFE TOUR PAGE
FOR DIRECT LINKS TO EACH POST ON THIS TOUR, UPDATED DAILY,
or visit the blogs directly:

THE OTHER HALF
OF HAPPY
by
Rebecca Balcárcel
Contemporary / Middle Grade / Multi-cultural Family
Publisher: Chronicle Books
Date of Publication: August 20, 2019
Number of Pages: 332
Scroll down for giveaway!

Quijana is a girl in pieces.
One-half Guatemalan, one-half American: When Quijana’s Guatemalan cousins move to town, her dad seems ashamed that she doesn’t know more about her family’s heritage.
One-half crush, one-half buddy: When Quijana meets Zuri and Jayden, she knows she’s found true friends. But she can’t help the growing feelings she has for Jayden.
One-half kid, one-half grown-up: Quijana spends her nights Skyping with her ailing grandma and trying to figure out what’s going on with her increasingly hard-to-reach brother.
In the course of this immersive and beautifully written novel, Quijana must figure out which parts of herself are most important, and which pieces come together to make her whole.
This lyrical debut from Rebecca Balcárcel is a heartfelt poetic portrayal of a girl growing up, fitting in, and learning what it means to belong.
PRAISE FOR THE OTHER HALF OF HAPPY:
“Seriously, I have never felt so seen in a book.” —Sophia Jimenez of @LatinxinPub

“Balcárcel’s well-rounded characters, complex friendships, and nuanced family dynamics will resonate with many readers. This is a title that will remain relevant long past its publication date. A must-have for all library collections.” — School Library Journal starred review

“With poetic, flowing prose that sometimes feels more like a song and characters so convincing that they seem real, Balcárcel’s stunning debut depicts the struggles of being raised with two cultures and the challenges of not being “authentic” enough—in this case, “not Guatemalan enough” or “not American enough.” A lovely, moving, and realistic view of the struggles and insecurities—as well as the beauty—that comes from being bicultural.” — Booklist starred review

“One of the best and most compassionate depictions of autism I have ever read in fiction.” — Latinas Leyendo

Chapter One of The Other Half of Happy

I live in a tilted house. A bowling ball on our living room floor would roll past the couch, past the dining table, all the way to the kitchen sink. And if the sink wasn’t there and the wall wasn’t there and the bathroom behind that wasn’t there, the ball would roll all the way to my room at the end of the house. That’s what it’s like being twelve. Everything roll- ing toward you.
“Quijana?” Mom’s voice thuds against my door.
“M’ija,” Dad calls.
It’s not really our house. We rent. But even if the doors hang crooked and won’t close, and even if Mom never comes home till bedtime anymore, and Dad looks tired when he cleans up after supper, I like this tilted house. I get my own room, and there’s a backyard swing. There’s even a stove with two ovens, the upper one like a dresser drawer. We can bake peach cobbler and cheesy nachos at the same time. Like we might today if we weren’t destroying the living room, pulling everything off the walls.
“Quijana, we need another pair of hands, here.”
“Is she outside?”
I wish I were. I’d jump on the swing, pump my legs, climb high, and whoosh through the air. Then I’d sing. It’s my secret favorite thing, even better than peach cobbler. When I sing out there, something rises up my spine and tingles the top of my head. The notes lift me up until I weigh nothing. I could almost let go and sail over the treetops.
Which is another good thing about this tilted house. We can sing in it. Back at the apartment, way back when my little brother was born, Dad would strum his guitar, and we’d sing ballads in English, boleros in Spanish. Then a neighbor would pound on the wall. Or the ceiling. Apartment walls are noth- ing but panels of saltine crackers.
“I’ll check the backyard.”
No one can tell me why this house tilts. The landlady tried. “That ol’ Texas sun turns dirt to dust. Can’t build noth- ing on dust.” Mom says it’s the clay soil that’s under the house that slickens in the rain. Dad tells me the builders tried to stairstep a hill, putting each house on a bulldozed shelf. “But no one cheats Mother Earth. She’s remaking her hill, filling in the shelves to make a slope again.” Mostly I don’t notice the tilt. But sometimes, like now, the walk from my room to the kitchen seems steep.
“Quijana.” Dad’s face appears at my bedroom door.
Of course I should be helping. I hang my head. The thing is, those boleros we sing in Spanish? I’ve memorized the sounds. But I don’t know what they mean. And now Mom and Dad are Spanish-izing the whole house.
Dad looks toward the ceiling as if he’ll find a power-up of patience there. Ever since Tío Pancho called and said, “Adiós, Chicago. I got a job in Dallas!” Dad’s been different. He’s play- ing more marimba music on his phone. He talked me into tak- ing Spanish instead of Mandarin in school.
Last night, Dad went over to help unload the moving van. We’re all going to visit when they get settled. Then I’ll meet the whole family: Tío Pancho, Tía Lencha, and three cousins. They’ve lived in the States for a while now, but we’ve never been able to visit them in Chicago.
The door flies all the way open, and Memito tumbles in. He thrusts a book in my face and climbs on my lap. He thinks my body is a big chair, just for him.
“He wants to read,” I say to Dad. I’d much rather read. A knot kinks in my chest when I think of taking down pictures of me and putting up paintings of Guatemala, the place where Dad was born but I’ve never been. “Can’t we read first?”
“Read afterward,” Dad says.
I start seventh grade in forty-eight hours, so I also want to load my backpack. My folders and notebook paper are still slouching in Kroger bags. They’ll have to wait. I stand up slowly, tipping Memito onto his feet. “I guess we better.”
Dad leaves, but Memito’s bottom lip pooches out. “I know.”
He waves the book again and stomps his foot.
“It wasn’t my idea.”
His face starts to crumple into a cry. “Ride?” I say. He drops the book as I lift him up.
I hear Mom ask, “You didn’t tell her, did you?”
Tell me what?
He’s almost too heavy, but I hoist Memito over my head onto my shoulders. We march toward weavings and clay pots and volcano pictures—all pretty, but not home. We march up, up, up. Up the hill of this tilted house.

Rebecca is a bi-cultural Latina who loves her autistic sons, her kitty, and serving the students of Tarrant County College as Associate Professor of English. She holds an MFA from Bennington Writing Seminars, where she was awarded the Jane Kenton Poetry Prize. THE OTHER HALF OF HAPPY is her debut novel.