Karen Kondazian’s debut novel is a historically accurate and  emotionally compelling look at the life of Charley Parkhurst, a famous stagecoach driver (Whip) for Wells Fargo in the 1800s. 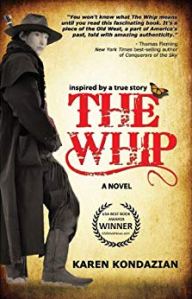 “One-Eyed Charley” drove passengers and payloads overland in California for over thirty years covering rugged terrain and encountering dangerous highwaymen along the way. He was remembered for always being on time, for his understanding and deft handling of the horses, his colorful language, dirt crusted and sunburned visage, taste for whiskey, chewing tobacco and cigars, a friendly demeanor that earned him respect and friendship, and nerves of steel that kept him calm in all circumstances. Everyone in the territory from Sacramento to San Jose to San Francisco knew Charley Parkhurst… or thought they did. When he died in 1879 from tongue and throat cancer, Charley’s well kept secret was finally revealed. He was a woman!

This is a fascinating book that reveals a part of the Old West that is seldom written about; there were a lot of women who assumed male identities in order to survive. Although it re-imagines the details of Charley’s secret life, it unfolds with amazing sensitivity and authenticity. The characters have real depth, and Charley’s path from orphan, to wife and mother, to widow with nothing but revenge driving her onward, to stagecoach driver, equality and freedom in a male dominated world, makes for compelling reading.

Karen Kondazian has not only captured the historical period in rich detail, but more importantly she reveals Charley’s inner thoughts and emotions that bear witness to the secret longings and loneliness that living such a life must have had on this remarkable woman.

Fact is often stranger than fiction, yet in this case the imaginative mind of Karen Kondazian takes what little is known of this historical figure, fills in the blanks, and writes a novel that the reader will find hard to put down. The Whip is thoughtful, often heartbreaking, yet in the end… triumphant!

Whether you are a fan of the western genre or not, this is a must read. Don’t miss it.