SOMETHING WORTH DOING
A Novel of an Early Suffragist
by
Jane Kirkpatrick
Genre: Christian Historical Fiction
Publisher: Revell
Publication Date: September 1, 2020
Number of Pages: 336
Scroll down for the giveaway!

Some things are worth doing—even when the cost is great In 1853, Abigail Scott was a nineteen-year-old schoolteacher in Oregon Territory when she married Ben Duniway. Marriage meant giving up on teaching, but Abigail always believed she was meant to be more than a good wife and mother. When Abigail becomes the primary breadwinner for her growing family, what she sees as a working woman appalls her—and prompts her to devote her life to fighting for the rights of women, including the right to vote.
Based on a true story, Something Worth Doing will resonate with modern women who still grapple with the pull between career and family, finding their place in the public sphere, and dealing with frustrations and prejudices when competing in male-dominated spaces.
PRAISE FOR SOMETHING WORTH DOING:
“I have long admired Jane Kirkpatrick’s rich historical fiction, and Something Worth Doing is well worth reading! Oregonian Abigail Duniway is a vibrant, fiercely passionate, and determined activist who fought for women’s suffrage. Women of today have cause to respect and admire her—as well as the loving, patient, and supportive husband who encouraged her to continue ‘the silent hunt.'” —Francine Rivers, author of Redeeming Love
“On the trail to Oregon, young Jenny Scott lost her beloved mother and little brother and learned that no matter what, she must persist until she reaches her goal. Remembering her mother’s words—‘a woman’s life is so hard’—the young woman who became Abigail Scott Duniway came to understand through observation and experience that law and custom favored men. The author brings alive Abigail’s struggles as frontier wife and mother turned newspaper publisher, prolific writer, and activist in her lifelong battle to win the vote and other rights for women in Oregon and beyond. Jane Kirkpatrick’s story of this persistent, passionate, and bold Oregon icon is indeed Something Worth Doing!” —Susan G. Butruille, author of Women’s Voices from the Oregon Trail, now in a 25th anniversary edition
CLICK TO PURCHASE
Amazon ┃ Barnes and Noble ┃ Bookshop.org
Christianbook.com ┃ IndieBound ┃ Revell 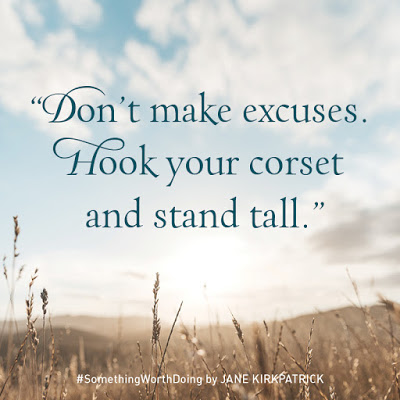 A Novel of an Early Suffragist

Her dreams of late had been of books with maps of unknown places. Jenny Scott wished she were dreaming now instead of sitting here beside the family wagon, a gushing stream to serenade them. They’d left Illinois two months previous—2 April 1852. She had written the date in the family journal she’d been assigned to keep as they crossed the continent. Since that first roll-­out of wagons toward the west, Jenny traveled without maps. She needed them to help her reduce the fear and anxiety of the unknown; but she did not have them. Though only seventeen, she’d already learned that living required coming to terms with uncertainty—­not that she did that well. She had lost another kind of map as well—­the map of her mother.

A different kind of pain awaited this June afternoon.

“The agony will be worth it.” Jenny spoke with conviction as she eyed the fat needle her new friend blackened in the flame. Then, “Won’t it?”

“It does have a sting,” Shirley Ellis said. “Fair warning.”

Jenny lifted the dark curls to hold them behind her ears. She thought of her hair as unruly with its thickness and natural twists that made morning brushing a chore. She envied her brothers who kept their hair short, curls under control.

Kate, Jenny’s twelve-­year-­old sister, patted Jenny’s shoulder while Shirley continued. “Shakespeare had this done and even biblical Jacob gave a pair to Rachel way back when. The pain has to come before the glory.”

“I’m here to comfort you,” Kate said, “but I don’t understand why you want to hurt yourself for fashion.”

Ignoring her sister, Jenny took a deep breath. She sat on a three-­legged stool they used to milk the cow. The stool did double duty as a seat for medical ministrations. Jenny squeezed her eyes shut. “Go ahead. Do it.”

Kate pinched her sister’s earlobe as hard as she could, then said to Shirley, “Now.”

The pain of the needle seared. Her sister’s pinching simply wasn’t enough to dull the agony. But at least Jenny felt misery for something physical instead of the heartache she’d carried since the deaths. Did I know that physical pain could distract from emotional hurting?

She felt the blood trickle down her neck as Shirley pulled the needle out. “It’s a good thing I have a strong stomach,” Jenny said. Kate dabbed at Jenny’s bleeding earlobe. They’d have to soak the handkerchief to rid it of the red. “Are you certain that Jacob gave Rachel a pair of earrings? What chapter and verse?”

“I don’t really remember,” Shirley said. She had thick, naturally arched eyebrows that framed her blue eyes. “It’s too late for second thoughts, though if you don’t put the pin through, it’ll grow new flesh right over the hole.” Shirley dabbed at Jenny’s ear with a clean handkerchief, then wiped the needle, and now rolled it in the flame again until blackened.

She straightened her back. Kate pinched the other ear and Jenny closed her eyes. The second piercing commenced. Her older sister Fanny, standing to the side, winced. It took a team.

“Finished. And you didn’t even faint,” Shirley said.

Kate dabbed at the blood on Jenny’s cheek, then held out the tourmaline-­studded gold rings. “I’ll put them in for you.”

Jenny felt the metal push into her ears, surprised again at the sting and pain.

“You’ll have to twirl them a few times a day until they heal,” Shirley warned. “You don’t want the skin to attach itself to the rings.” She eyed the earrings now adorning Jenny’s ears. “They’re really pretty with that one gold gem in the middle of the disc. A good size too. Won’t draw too much attraction.”

“The point,” Jenny corrected, “is not adornment but memorializing. Momma loved these. She got them from Grandma who received them from her mother, and she left them to me.”

“I thought one of the stones like those we covered Momma’s grave with was your memorial keepsake. You insisted to Papa that you had to put that rock in the wagon.” Fanny dabbed Jenny’s other ear with a bit of whiskey kept only for medicinal purposes.

“You can’t have too many mementos, I say.” Shirley wiped the needle with the liquor, then put it back into her fabric sewing kit attached to her bodice.

“It’s more than a memento. Earrings and rocks and a cut of hair, they’re all ephemera, items of the historical record that are neither documents nor maps,” Jenny said. She touched her ear and winced.

“What’s a little smarting in memory of our momma who endured so much bringing us into the world, and then had to leave it so prematurely? She didn’t want to leave Illinois, you know. I heard her tell Papa that they’d always lived on a frontier, and now civilization was catching up to them so couldn’t they stay and enjoy it. Papa said no.” Tears welled in her eyes while her stomach clenched with anger. It wasn’t fair, it just wasn’t.

“Will you take some item for . . . your friend too?” Fanny asked. Her voice was gentle. A boy Jenny had met on the trail had drowned not long after their mother’s death.

“One earring for Momma and the other for him. And then no more.” She took the mirror Shirley handed her, turned her head from side to side to admire the earrings. “No more sadness. I’ve had enough.” She stood and with conviction declared, “I will control it.”

Their brother Harvey sauntered by as Jenny made her declaration of sending grief away. Harvey, with his good looks and opinions, walked backward away from them then, saying, “You can’t control anything, you females. Not a thing. Lucky for you us men protect you.”

“Ha!” Jenny shouted after him as he turned his back to them, striding off as though he owned the land, the stream—­his future. “No one knows what they can accomplish until they undertake it.” Fanny, Shirley, and Kate nodded agreement.

And so Abigail Jane “Jenny” Scott set forth to do the best she could to prove her brother—­and all men—­wrong. Girls had power too. One day, she’d show them.

Jane Kirkpatrick is the New York Times and CBA bestselling and award-winning author of more than thirty books, including One More River to Cross, Everything She Didn’t Say, All Together in One Place, A Light in the Wilderness, The Memory Weaver, This Road We Traveled, and A Sweetness to the Soul, which won the prestigious Wrangler Award from the Western Heritage Center.
Her works have won the WILLA Literary Award, the Carol Award for Historical Fiction, and the 2016 Will Rogers Gold Medallion Award. Jane divides her time between Central Oregon and California with her husband, Jerry, and Cavalier King Charles Spaniel, Caesar.
Website ║ Bookbub ║ Facebook  ║ Twitter ║ Pinterest ║ Amazon ║ Goodreads
———————————
GIVEAWAY! GIVEAWAY! GIVEAWAY!
THREE WINNERS!
1st: Copy of Something Worth Doing + Oregon Map Bag
+ $25 Barnes and Noble Gift Card;
2nd and 3rd:
Copy of Something Worth Doing + $10 Barnes and Noble Gift Card.
SEPTEMBER 15-25, 2020
(US ONLY) 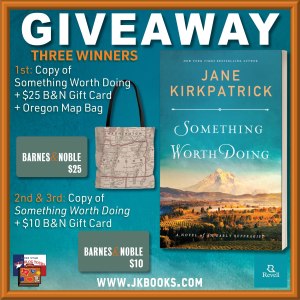 a Rafflecopter giveaway
https://widget-prime.rafflecopter.com/launch.js
CLICK TO VISIT THE LONE STAR LITERARY LIFE TOUR PAGE
FOR DIRECT LINKS TO EACH POST ON THIS TOUR, UPDATED DAILY,
or visit the blogs directly: